Chinese mobile manufacturer Realme recently launched the Reamle GT Neo 3 Naruto Edition phone in China with a custom design and a lot of new accessories. Now we are also getting such news that the edition of this phone will be launched in the Indian market soon. According to the reports of tipsters, this device is going to be launched in India soon. Recently, Thor: Love and Thunder Edition of GT Neo 3 has also been launched in India by the Realme company.

The India release date of this Realme GT Neo 3 phone is yet to be confirmed, but according to sources, it is expected to be launched in India by next month. Now we will be interesting to see with this phone whether the company will launch this phone in the market with the same special box packaging key with which it landed in China. The Naruto Edition of this realme phone will be launched in the market with accessories like Naruto scroll bag, Naruto stickers, orange colored power brick and SIM ejector tool. 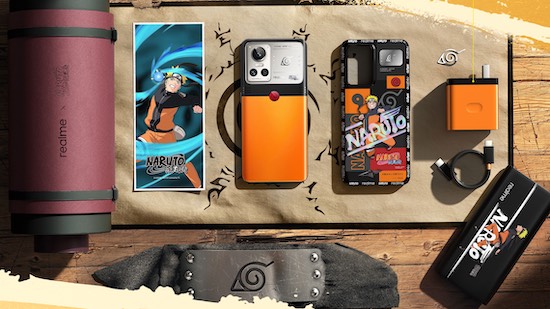 This Realme smartphone GT Neo 3 Naruto Edition sports a triple-tone back panel, with an orange color at the bottom of the back and a mix of black and gray at the top of the phone. We also get a special symbol on the camera of this phone, which represents the village of Naruto, Konohagakure. Apart from the design of the phone, the rest of the features in this smartphone have been given like Realme’s Vanilla GT Neo 3 phone. The Realme GT Neo 3 Naruto Edition device sports a 6.7-inch AMOLED display with full-HD+ resolution. We have been given 120Hz refresh rate and 1000Hz touch sampling rate in this phone. This smartphone provides support for features like DC Dimming. HDR10+ certification has been given in this phone. Also, the protection of Corning Gorilla Glass has also been given on the screen of this smartphone.

This Realme device is powered by MediaTek Dimension 8100 SoC with 12GB LPDDR5 RAM and 256GB UFS 3.1 internal storage. We have been provided with a triple camera system at the back with 50MP Sony IMX 766 main lens, 8MP ultra-wide lens and 2MP macro sensor in this phone. On the front side of this smartphone, a 16MP selfie snapper has been given as a second camera. This smartphone device has a battery of 4,500mAh, which provides support for 150W fast charging. We have also been provided with an in-display fingerprint scanner for security.